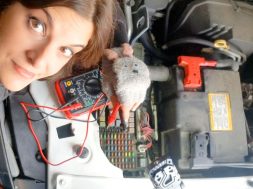 License plate registration stickers aren’t cheap, especially in some states, which makes them a hot commodity to certain opportunistic individuals who’d rather steal them instead and drive around on your dime.

If you want to foil their plans, cross-cut your sticker with a razor blade. If the thief tries to pull it off, it will come off in pieces. If they’re really determined, they can always remove the other pieces too but this will take much longer and put them at higher risk for getting caught. And, if you only lose a small piece, you may not have to get a replacement.

Some states already have stickers that are pre-sliced or scored so once they’re stuck to anything other than the backing paper, any attempts at removal will destroy them. If yours isn’t, then it’s well worth the extra time to do it manually and smile when you’re able to give an already bad person a bad day.

Slicing, tape, clearcoat paint – what are some of your tactics for protecting your sticker?